Executive Director of the Middle East 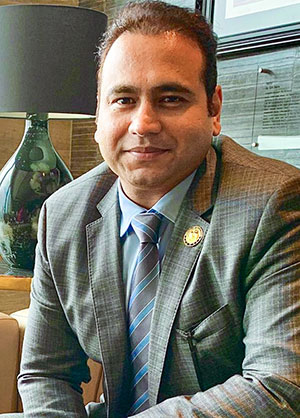 H.E. Mr. Zulfiquar Ghadiyali is a multi-faceted technocrat, businessman, and entrepreneur donning multiple hats. His business interests and acumen span different countries and diverse sectors across all major continents. He is a social entrepreneur and a social innovator, who aspires to create a significant social impact on countries and their citizens.

H.E. Mr. Ghadiyali’s family business spans across Asia and the Middle East in the field of Real Estate, hospitality, and General Trading. H. E. is a founder of Los Angeles based film and entertainment production company called Cinemoi, which focuses on artificial intelligence and virtual reality. H.E. has been involved in various social entrepreneurship projects in the field of education, renewable energy, medical and healthcare services across Asia, India, and Africa under his chairmanship at Blue Sky Villages - social Impact investment enterprise. BlueSky Village focuses on social entrepreneurship initiatives across the world. H.E. represents industry and society at large and has been a pioneer in supporting companies from across the world to establish in the Middle East and North Africa with support of the highest levels through the office of HRH Sheikh.

H.E. is involved in various social and political initiatives and commands several important positions across mining, logistics, Aerospace sectors. H.E. is also an important shareholder at Encanto Potash Corporations, Toronto Stock Exchange-listed entity with mining reserves worth more than USD $150 billion besides being an important board member of World Defence holdings and ING Robotics based out of Montreal, Canada.

Under the chairmanship of His Highness Sheikh Mohammed bin Sultan bin Hamdan Al Nahyan. H.E. is also Chief Strategy Officer for Lycee Education Technology, which is a global partner company of Microsoft in Education.