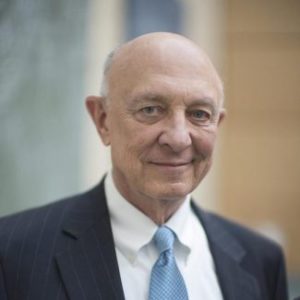 Venture Partner with Lux Capital. He is also Chairman of Woolsey Partners LLC.

James Woolsey, the director of the Central Intelligence Agency (CIA) under President Bill Clinton, is a well-connected advocate of U.S. foreign policies. He has supported the work of several neoconservative-led groups, including the Committee on the Present Danger, the Committee for the Liberation of Iraq, the Project for the New American Century, and the Center for Security Policy, among others.

Woolsey’s government work, aside from the CIA, has included being a member of the National Commission on Energy Policy, serving on the George W. Bush-era Defense Policy Board, advising the Deterrence Concepts Advisory Panel, serving on the controversial “Rumsfeld Missile Commission” (chaired by Donald Rumsfeld), and serving on various arms control treaty negotiation team

Woolsey chairs the Leadership Council of the Foundation for Defense of Democracies, an important bastion of hawkish “pro-Israel” advocacy in the United States that has served as an outpost for many well-known rightist ideologues. Among his activities at FDD has been to support the work of its Energy Security” program, which advocates for the United States to break “break the oil monopoly”.

Woolsey is a frequent consultant and advisor to private businesses and defense contractors, as well as government boards and panels. A former vice president of Booz Allen Hamilton, a Pentagon contractor, and partner at the high-profile D.C. law firm Shea and Gardner, Woolsey’s experience includes serving as chair of his firm Woolsey Partners, serving as a venture partner and senior advisor to VantagePoint Venture Partners, chairing an advisory group of the private equity fund Paladin Capital Group, and serving as counsel to the law firm Goodwin Procter.